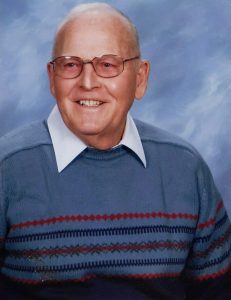 Don Grigg, 91, of Lawton, passed away on Tuesday, September 10, 2019 at the Sunrise Retirement Nursing Home in Sioux City, due to complications from a stroke.

In keeping with his wishes, there will be no visitation, funeral nor memorial services held.  Burial of his cremains will be at a private family gathering at a later date in Banner Township Cemetery.

Don was born June 8, 1928 in Sioux City to Tom and Alma (Ludwig) Grigg.  He graduated from Lawton High School in 1945 and did farm labor in the area for several years.

He attended the Commercial Trade Institute in Birmingham, Alabama in 1949, learning Electric Appliance and Servicing, after which he became a partner in G & S Electric, wiring farm homes in the Lawton area.

Don was drafted into the Army in 1950 where he served in the 45th Infantry Division Signal Corps in Korea during that conflict.

Upon discharge in 1952, he married Mabel (Willer) Howard of Lawton and began working for Western Iowa Telephone Association.  He soon rose to the position of General Manager where he served for 37 years. He was president of the Iowa telephone association for three years.

Upon his retirement, Don was selected as a member of the Iowa Institute of Cooperatives Hall of Fame.  He later was elected to the Lawton City Council, where he served for 10 years.

Don loved the town of Lawton, his lifetime home, and made numerous generous donations to the betterment of the community.

Don is survived by a son, Tony (Jayne) of Sioux City, a step-son, Jack Howard (Leslie) of Lawton and several step grandchildren, nieces and nephews.  He was preceded in death by his parents, wife Mabel, a step-son, Mark Howard, and two sisters, Dorothie Riemcke and Beatrice Shoemaker, both of Lawton.