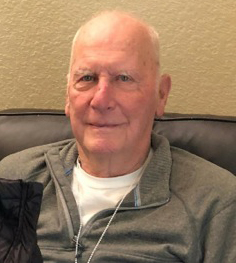 A funeral service was held on Saturday, September 14, 2019 at 11:00 a.m. at the Nicklas D. Jensen Funeral Home of Moville with Rev. Jill Clem officiating.  Burial was held at the Arlington Cemetery of Moville with military rites conducted by the American Legion Wink-Sparks Post #303 of Moville.

Robert Gene Manker was born on March 23, 1933 in Moville, Iowa to Neil and Bernice (Weaver) Manker.  He was a graduate of Moville High School.

Upon graduation he joined the Air Force, where he served in active duty for four years and was inactive for two.

Bob was united in marriage to Vicki Lee Livermore on March 15, 1958 in Lake City, Iowa.  They made their home in Moville and were blessed with four children.

Bob was a farmer and member of the United Methodist Church in Moville.  He spent many hours volunteering for Woodbury Central Athletics as well as coaching Moville’s Majors and Minors baseball teams.

His greatest joys in life came from spending time with his children, grandchildren and great-grandchildren.

He is also survived by his sister-in-law, Willa Lee Manker; his brothers-in-law, Dan (Mary) Livermore and Ron (Joni) Livermore; and many nieces, nephews and friends.

He was preceded in death by his parents, Neil and Bernice Manker; his mother and father-in-law, Clarence and Eleanor Livermore; his sister and brother-in-law, Frances and Wayne Vargason; and his brother, Darrell Manker.