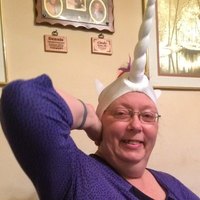 Cindy was born on July 17, 1957.  She was raised in Minneapolis, Minnesota, where she attended West High, graduating class of ‘75.

Cindy married Denny Cook on April 22, 1978 in Minneapolis, forever known as “Cindy and Denny” because they truly were “one”.

They lived in Chanhassen, Minnesota until moving to Sioux City, Iowa in 1979 and to Moville — their dream come true — in 1991.

Cindy and Denny could not have children of their own but they were the “best aunt and uncle ever” to all children, even ones they were not related to.

They loved to go fishing, traveling to South Dakota and Minnesota lakes and rivers. They were inseparable until Denny’s death on February 10, 2004.

Cindy is preceded in death by husband, Denny and her brother, Steve O’Hara.