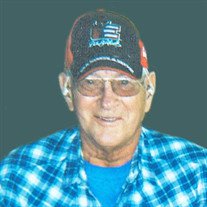 Hilburn Steffe, Jr. was born April 25, 1926 in Moville, Iowa to Hilburn C. and Alice (Hane) Steffe. He attended country schools in rural Woodbury County. He was united in marriage to Mary Lou Lacy on December 22, 1944. Mary preceded him in death on January 5, 2015.

He proudly served his country during World War II as a member of the United States Army. Following his discharge, he farmed in rural Woodbury County. He later moved to Sioux City and worked at Tyson Foods (formerly IBP) for several years before retiring in 1991.

Hilburn enjoyed rebuilding salvaged cars, along with working in his yard. He truly cherished the time he could spend with his family, especially his grandchildren.

Those left to cherish his memory are his son, Robert “Bob” Steffe of Sioux City; his daughters, Barbara Jean Taylor of Sioux City and Mary “Tooty” (Harold) Vugteveen of Spirit Lake, Iowa.

He was preceded in death by his parents; his wife, Mary; his brother, David; and his sister-in-law, Fairy.

The family wishes to extend a special thank you to the caring staff at Holy Spirit Retirement Home and to Hospice of Siouxland.