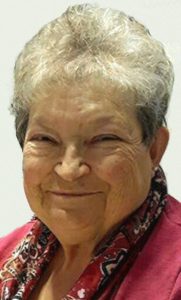 A Funeral Mass will be held at 10:00 a.m. on Thursday, September 26, 2019 at Cathedral of the Epiphany – St. Boniface Worship Site.  Burial will follow at Memorial Park Cemetery.

Visitation will be from 5:00 to 7:00 p.m. Wednesday, September 25, 2019 at Meyer Brothers Colonial Chapel (3220 Stone Park Blvd.) with a Vigil Service at 7:00 p.m.  Online condolences may be expressed at www.meyerbroschapels.com

Sharon was raised in Bronson and graduated from Bronson High School.  Following high school, she moved to Sioux City and started working as a waitress.

During this time, she met Francis G. “Fran” Hansen. They were united in marriage on June 11, 1966 in Sioux City.  They made their home in Sioux City and she worked at Zenith, Aalfs Manufacturing then at Dial America.

Sharon was a member of St. Boniface Catholic Church and in recent years, she enjoyed attending St. Mary’s in Danbury.

She enjoyed camping, singing, cooking, ceramics and playing cribbage, dominoes and dice.  Above all, Sharon enjoyed spending time with her family.

She was preceded in death by her parents; her husband; one son, Raymond Hansen; and one sister, Karen Burke.