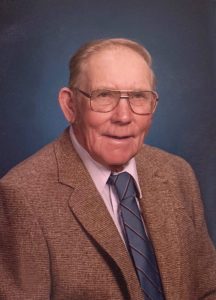 He attended many rural schools in Woodbury County and graduated from Anthon High School in 1943.

Bob grew up during the Depression and started working in the fields when he was 9 years old behind a team of horses, Babe and Bird.

Bob had a love of purebred livestock.  He maintained Shorthorn cattle, Hampshire & Duroc hogs, and Suffolk sheep. He loved the outdoors and nature.

Bob could identify all the trees in the area by name and every bird by its call, including the illustrious Ooh-Ah bird.

Bob was united in marriage to Eleanore Winquist of Akron, Iowa, who was teaching in Anthon in August 1951.

He bought the Theodore Franks place in August 1949 known as “the sheep place” and in 1955, they bought the Karl Peterson place where Bob and Eleanore raised their family. It is this place where Bob died mending fences and checking his cattle.

Bob served on the board of directors for the Iowa Ram Testing Association. Bob received the Iowa Master Producer Adult Award in the Purebred division in 1984.

He showed his sheep at the county, state and national shows and won many awards, winning more than 25 trophies.

He sold breeding stock to 31 states and one Canadian Province. Bob was a 4-H leader of the Kedron Hillbillies and he was on the county subcommittee for many years.

In 1984, he was made an honorary 4-H member and received the Outstanding 4-H Service Award. His family hosted exchange students from Massachusetts, Canada, Germany, Norway and France.

He served on the board of Iowa Suffolk Sheep Association.

Bob loved telling jokes and it was extremely easy for him to laugh. For his children, grandchildren, nieces, nephews and anyone else who might indulge in his antics, he was known for his amazing ability to hypnotize chickens, his infamous monkey face and his rendition of the not-so-famous song, “Mrs. Bliss.”

Bob was a wonderful story teller and a historian of sorts, especially as it related to the local area. He remembered everything.

He was preceded in death by his parents, Scates and Iva Pearl Lewis; his parents-in-law, John and Muriel Winquist; sister Roberta Petersen; and brothers-in-law Alfred Hamann, Marvin Petersen, Eldon Blenner and Charles Buckley.