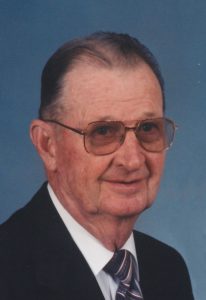 Visitation will be one hour prior to the service Saturday at the funeral home. Condolences may be sent online to www.meyerbroschapels.com.

Harold Dale Howard was born April 12, 1921 to James and Hazel (Berglund) Howard in Flandreau, South Dakota. At age 2, the family moved to Elkton, South Dakota, where he lived until third grade.

They moved to Sioux City and lived there until he reached the sixth grade, and then he moved to a farm Northeast of Bronson in 1933 and attended country school. He later graduated from Bronson High School in 1939.

In 1941, before World War II, he moved to California to work for Lockheed Aircraft.

In 1942, he married Leona Willer of Lawton. In 1943, the couple moved back to Omaha, Nebraska to work for the Glen L. Martin Bomber Plant until the war was over. In 1944 their first child, Jim, was born.

With the war over, they moved back to Lawton. He purchased the Lawton Refrigerated Locker Plant.

He began operation on January 1, 1946 and owned it until January 1, 1956. By then, their second son, Ray, and their daughter, Sharon, had joined the family.

Harold belonged to the Lawton Fire Department, served on Lawton Council for 8 years and drove a school bus for 11 years.

In 1956, he began his banking career with Morningside Savings Bank. The name was later changed to Northwestern National Bank, and he retired 26 years later as Vice President and manager of the Morningside Branch.

During this time, he belonged to the Morningside Kiwanis Club for over 26 years. He was president of the club in 1965, and he attended the International Kiwanis Convention in New York. He  attended again in 1979 in Los Angeles.

He also belonged to the Izaak Walton League for 25 years.

He loved his family, the outdoors, the lakes, camping with family and friends, and spending the winters in Texas.

Harold was preceded in death by his wife Leona in 2008, along with his parents and his father-in-law and mother-in-law, Clifford and Laura Willer.