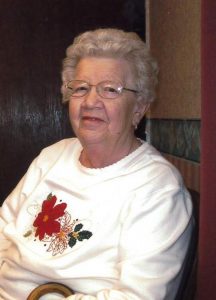 Funeral services were held at 10:30 a.m. on Wednesday, October 9, 2019 at the Trinity Lutheran Church in Anthon.

The Greenwood-Schubert Funeral Home is assisting the family with arrangements. Online condolences may be sent to the family at www.greenwoodfuneral.com.

She came from a family of ten children, three brothers and seven sisters.  She went to country school in rural Anthon through the eighth grade.

Darlene met the love of her life, Paul Jansen, and they married on December 16, 1947 at Midway Lutheran Church.  To this union, four children were born: Douglas, Nancy, Sandra and Janet.  They spent many years on the farm before moving into town.

Paul and Darlene loved going to local dances where they danced to polka and waltz songs.

Darlene worked numerous jobs.  She worked at Swift Turkey Plant, she cooked at the Fireside Lounge in Anthon, and for 20 years, she was a CNA at Correctionville Nursing Home before her retirement.

Darlene could always be found in the kitchen cooking and baking.  She will be remembered for her cookies and bars.

Darlene always had the coffee pot on and was ready to entertain “drop-in” guests. She also enjoyed putting puzzles together, word search books and spending time with all of her grandchildren and great-grandchildren.

Darlene was a member of Trinity Lutheran Church in Anthon, Iowa.  She was also a member of the American Legion Auxiliary in Anthon.

On Saturday, October 5, 2019, Darlene passed away at the Correctionville Nursing Home surrounded by her family.