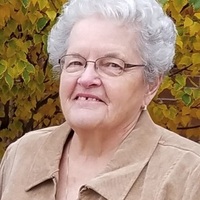 The memorial service is at 10:30 a.m. Thursday, October 17 at First Lutheran Church in Kingsley. Burial is at Kingsley Cemetery. Visitation is from 5-7 p.m. Wednesday, October 16 at the church, with the family present during this time and a prayer service at 7 p.m.

Marge was born February 28, 1945 in Pender, Nebraska, to Harry and Edna (Glissman) Ramspott. She attended school in Pender, graduating from Pender High School in 1963. She furthered her education by attending and graduating from Wayne State College in 1965.

She worked as a CNA and office administrator at the Kingsley Specialty Care Center for over 40 years, retiring in 2014.

Marge was preceded in death by her parents and her husband, Elroy.