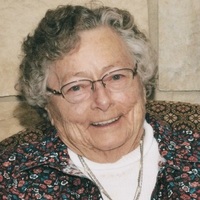 Pauline was born September 2, 1932 in Woodbury County, the daughter of Theodore A. and Marie E. (Meyer) Eickholt. She attended country school at Miller #7 through the eighth grade. Pauline continued her education at Oto High School, graduating in 1950.

Pauline and Gerald D. “Jerry” Dugan were united in marriage on October 12, 1950 at St. Mary’s Catholic Church in Oto, Iowa. To this union two daughters and a son were born. They started farming side by side in 1960.

She had also worked candling eggs at Sheehan Produce and as a clerk at Smitty’s Department Store in Mesa, Arizona. Starting in 1977, Jerry and Pauline went south to Mesa, Arizona for the winters.

Jerry passed away June 4, 1998. In 2014, Pauline moved from Kingsley to Sioux City to reside at Bickford Cottage Assisted Living.

Pauline was a member of St. Michael’s Catholic Church in Kingsley where she was a Eucharistic minister and Lector. She loved quilting and crocheting as well as her flowers. She was always up for a card game and ice cream social.

After being alone for 21 years, she was reunited with her husband on what would have been their 69th wedding anniversary.