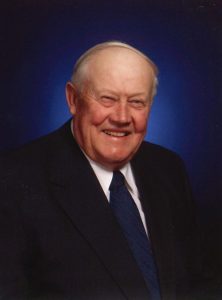 A Funeral Service was held at 10:30 a.m. Monday, October 21, 2019, in the United Methodist Church of Anthon, Iowa. Rev. Jena Finch-Manchester officiated. Committal Services followed in the Oak Hill Cemetery of Anthon, Iowa, with Military Rites conducted by the McNiff Post No. 389 of the American Legion of Anthon, Iowa.

Merlin Henry Kollbaum was born August 9, 1933, on the farm south of Ida Grove, Iowa.  He was the first son of Matt and Melinda (Hein) Kollbaum.

Merlin was baptized at the Lutheran church in Ida Grove, Iowa. He was raised on the family farm where he gained his deep love for farming. He attended Grant #5 School near Ida Grove.

In 1954 Merlin was drafted into the U.S. Army and served his country from 1954 to 1956. He attended basic training in Fort Leonard Wood, Missouri and was transferred to Korea, where he served the remainder of his tour during the Korean War.

On June 2, 1957, Merlin was united in marriage to Colleen Phillips. They farmed near Battle Creek, Iowa the first year of their marriage and then moved to the family farm southwest of Anthon, Iowa.

The couple was blessed with five children: Kevin, Rena, Sherrie, Kenny and Bradley. Merlin and Colleen retired in the late 1990s and they moved into the town of Anthon.

Merlin enjoyed his daily coffee, as well as hunting, fishing and golf. The couple loved to play cards and go out to dinner with friends. He looked forward to stag deer feeds with his hunting buddies and cherished his time visiting with family and friends.

In recent years Merlin enjoyed telling stories of farming and hunting incidents, which brought a chuckle to everyone listening.

He was proceeded in death by his wife Colleen; his parents, Matt and Melinda Kollbaum; sisters Vernette Messenbrink and Linda Lou Waderich; parents-in-law Joe and Elsie Phillips; a brother-in-law, Alfred “Bud” Schmidt; and a daughter-in-law, Roxann (Roarson) Kollbaum.