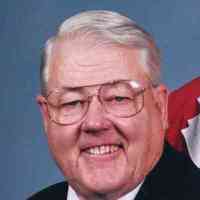 He moved to Oto, Iowa in 1942, graduating in 1948 from Anthon-Oto High School. Bernie lived on Evans Ave. in Riverside.

He joined the United States Army in 1951, serving in the Korean War. He was honorably discharged on March 16, 1953.

Bernie married Nancy Hodkinson in March of 1951. He drove truck for National Foods for 25 years and worked for Inter-Bake Food, retiring in 1983.

He enjoyed hunting, trap shooting, and dancing (especially the jitterbug). He was a member of the Community Presbyterian Church.

Bernie was preceded in death by his parents.