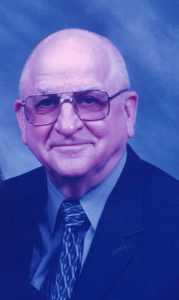 A funeral service was held on Saturday, November 2, 2019 at 11:00 AM at the United Methodist Church of Holstein with the Rev. Doresa K. Collogan officiating and military rites conducted by the American Legion Dessel-Schmidt Post #225 of Holstein.  Burial was at the Holstein Cemetery of Holstein.

He was a graduate of Cushing Consolidated School in 1947. He joined the military and served during the Korean War.

Henry was united in marriage to Betty Otto on March 31, 1951 in Colorado Springs, Colorado.  To this union three children were born.

They raised their family in Holstein where Henry managed the Co-op Elevator for many years in addition to selling seed corn for Co-op Seed Co. in Alta.

Henry was a member of the Holstein City Council, American Legion Dessel-Schmidt Post #225 and was a volunteer fireman.  He belonged to the Holstein United Methodist Church.

Henry enjoyed gardening, Bingo, bowling, golfing and playing cards.  He loved decorating the yard for the holidays and bird watching.

Henry was preceded in death by his parents; a daughter, Vickie (Otto) Dolde; two sisters and their husbands, Alice (Eldon) Heitmann and Iona (Francis) Fell; a brother, Donald (16 months old); a son-in-law, William Banwart and a brother-in-law, Eddie Witt.