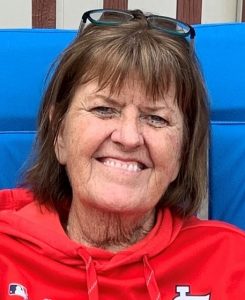 Funeral services were held at 11:00 a.m. on Monday, November 4, 2019 at First Lutheran Church in Kingsley, Iowa with Pastor Jason Letsche officiating.  Online condolences may be sent to rohdefh.com.

Patti was born November 20, 1954, Hartley, Iowa, the daughter of Gene and Donna (Brummer) Sorensen.  Patti grew up in Hartley graduating from Hartley High School after that she attended Wayne State University, where she graduated 1974.

Patti worked at St. Luke’s, Mercy One and Avera hospitals for over 35 years as a medical technologist.

Patti and Steve were married February 15, 1986 in Union County, South Dakota.  After their marriage Patti and Steve made their home in Kingsley, Iowa, where they raised their family.

Patti was very active playing golf, cards, fishing and other things that she enjoyed doing with her family and friends. She was extremely competitive in anything she did, always trying to win.  She was a member of the First Lutheran Church and the Brookside Golf Course.

Patti was preceded in death by her parents, Gene and Donna Sorensen; her mother-in-law and father-in-law, Elaine and Ronald Engle; her sister-in-law, Carol Sorensen; and a nephew, Robert Engle.