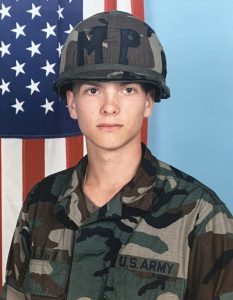 A Memorial Service was held at 10:30 a.m. Saturday, November 9, 2019 in the United Methodist Church of Anthon, Iowa. Rev. Jena Finch-Manchester officiated. Committal Services followed in the Oak Hill Cemetery of Anthon, Iowa, with Military Rites conducted by the McNiff Post No. 389 of the American Legion of Anthon, Iowa.

David Joseph Brown, the son of Joseph and Karen (Bottjen) Brown, was born on May 5, 1968 in Battle Creek, Iowa. He grew up in the Correctionville and Anthon areas and received his education from Anthon-Oto High School graduating with the class of 1987.

After graduation, David entered into the U.S. Army. He served four years during which time he was stationed overseas in Turkey and Panama.

Upon his honorable discharge from the service, David returned to Anthon and began working security at WinnaVegas Casino in Sloan, Iowa. He was also employed as the Director of Security at the riverboat casino in Sioux City, Iowa.

On September 22, 2001, David was united in marriage to Denise Hewitt in South Dakota. The couple made their home in the Sioux City area. They would later part ways. David then began working at American Popcorn in Sioux City as the Mixing Department Supervisor.

He was employed there until 2018 when health issues prevented him from continuing to work. In 2018, David moved to Rembrandt, Iowa to be closer to his brother.

David was an avid gun collector, and he enjoyed shooting clay targets. He liked watching western movies, and in his younger days, David loved riding his motorcycle.

David will be remembered as a hard worker who took pride his jobs. He was also very patriotic.

Left to cherish his memory include his mother, Karen (Bill) Smith of Sioux City, IA; brothers Randy (Carrie) Brown of Mapleton, IA; Darin (Becky) Brown of Rembrandt, IA; and Jonathan Rotramel of Ashville, NC; sisters Ronda (Jay) Hansen of Waukon, IA and Jackie (Wade) Neben of Omaha, NE; 14 nieces and nephews; one great-niece, one great-nephew and 2 more on the way; his stepmother, Sue Brown of Omaha, NE; and numerous aunts and uncles.