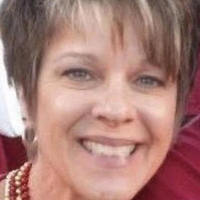 Memorial services were held at 11:00 A.M. Saturday, November 9, 2019 at Meyer Brothers Morningside Chapel.  Visitation will be one hour prior to the service at the funeral home.

Julie was born — aptly enough — on Christmas Day 1960, to the joy of everyone but her mom Beryl, who probably had better things to do.

She was raised on a small farm in rural Swaledale as a semi-middle kid of four girls. Pity her dad, Earl — five women and one bathroom.

She was a tomboy who drove the baler in those days, and was later a lead singer in a couple school plays.

She attended Rockwell-Swaledale High School and in 1978 made the mistake of saying yes to a prom date. Every year later the prom date sent her flowers on that day (or real close to it).  We later used that story as an example to our sons: sometimes they don’t leave.

She was a prom queen who raised three of her own kings. The class yearbook names her “Best Smile”. If you remember anything about my girl, it’s her smile that lit up the whole room.

In June 1978 she was diagnosed with Hodgkin’s Lymphoma. She underwent surgery and they nuked most of Cerro Gordo County to get the rest.

In 1982 she married the prom date and embarked on a life of leisure amongst the highly paid packing house workers. She worked various jobs in Luverne, MN; Kennewick, WA; and Garden City, KS (go there sometime), always aiming to be there when the kids got home.

In 1993 she moved back to Iowa (with us) and took a job at Morningside College as a receptionist and switchboard operator, a job she loved since every girl needed a mom to confide with on the way to the bathroom. She later became the degree auditor to catch people like my permanent-student sons and kick them out.

That one wasn’t as much fun, especially since Dane was there. By default she became a big ISU fan since a couple of the boys were going there, one of whom apparently attended classes. Sorry Jameo.

In order, her happiest moments were holding her granddaughter Aurora (Awawa), talking to her boys, and sitting on the patio with the stupid prom date that hadn’t left yet.

She was always amazed and happy that each of the boys found someone wonderful to be in their lives.

She visited many places over the years. The best were San Francisco; Savannah, GA; Ireland (the island place); and Bronson, IA (just kidding).

Best of all was a small steakhouse in Mason City called the Northwestern.  She loved to stay at the cool old boutique hotels.

In 2012 she developed a cough, later to discover it was lung cancer.  Surgery, radiation and chemo followed. In 2014 she was diagnosed with early stage breast cancer, same scenario there. The lung cancer snuck back in last year and as a result she lost her hair again.  It made her smile even bigger. She said it made her nose smaller.

She passed away at home with her favorite people in her favorite room on a beautiful day. We should all be so lucky.

She was preceded in death by her parents, Earl and Beryl Jorgensen, and her nephew, Tim Johnson.

In lieu of flowers Julie would love memorials to be directed to her family which will help fund her granddaughter and any future grandchildren’s education.