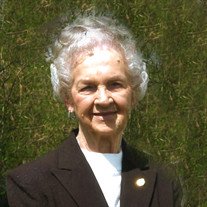 A funeral service was held at 11:00 AM on Friday, November 1 at Christy-Smith Morningside Chapel with the Rev. Del L. Olivier officiating. Interment was in Memorial Park Cemetery in Sioux City.  Online condolences may be made to the family at www.christysmith.com

She grew up in Sioux City living with her grandparents during the school year. She graduated from East High School and went on to National Business Training school in Sioux City.

Lois married Henry Hansen on April 28, 1945 in Sioux City. The couple took over the family farm from Henry’s parents near Lawton.

They moved in to Sioux City in 1962. Lois worked as a school secretary at Sunnyside School and at Anderson Abstract Company.

She was a former member of Augustana Lutheran Church where she did quilting for over 20 years. She enjoyed raising flowers with Henry for the local florists, going to dances weekly and playing the organ.

She was preceded in death by her husband Henry; her son Darrel; two sisters, Viola Lamb and Gladys Peterson; and a brother, Earl Fink.