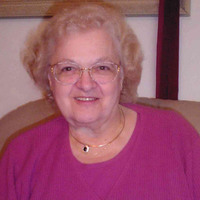 LouAnn Sylvia Glick, 85, of Sioux City, entered the Everlasting Kingdom of Heaven on November 11, 2019 surrounded by her family.

LouAnn was born June 10, 1934 in Cushing, Iowa daughter of Carl and Dorothea (Hansen) Bumann. She attended Holstein schools and graduated from Holstein High School in 1952.

LouAnn also took classes at Western Iowa Tech Community College, where she received a Mechanical Engineering Degree. She used her degree at One Hour Martinizing Dry Cleaners where she was the manager for numerous years.

She also worked at F.W. Means as a seamstress for many years. Her last job was at Professional Alterations.

LouAnn married Francis X. Glick Sr. on October 19, 1954 and together they had 5 children. Later they divorced.

LouAnn raised four children. While raising her children she became completely deaf. She knew sign language and could read people’s lips. Now this woman had an extra sense, as she couldn’t hear her children’s voices but she knew when something was going on. We never got away with anything; she always knew what her kids were doing.

She enjoyed reading, sewing, crotching, writing and painting as well as spending time with her grandchildren.

LouAnn was preceded in death by her parents; her sons, Francis Jr and Frankie Glick; her grandson, Garrett Glick; her brothers, Charles and Larry Bumann; and her sister, Mary Nell Hopwood.