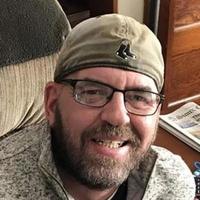 Mark Galles, 48, of Sioux City, passed away peacefully at his home on Thursday, November 14, 2019 after a  two-year battle with brain cancer.

Mark was born on June 8, 1971 in Colorado Springs, Colorado to John and Lois Galles. He graduated  from Kingsley-Pierson High School in 1989. He graduated from Westmar College in 1993 with dual bachelor’s degrees in both English and Art.

Mark wore many hats during his working years.  He was a newspaper sports writer, a bartender, and a mortgage broker, He also worked in IT sales for Gateway Computers and currently worked as an account manager in IT sales at Connection in Dakota Dunes, South Dakota.

He began dating Kristi Pearson, and in 2018 they married, joining their two families together. Mark was an avid golfer and cyclist.

He loved watching Liverpool Soccer and the Boston Red Sox.  Most importantly, he loved spending time with family and friends.

He was well-known for his sense of humor, wit, charm and his crazy antics that brought laughter to those around him.

He was especially close to his mother-in-law, Bunny Ericksen. They shared a close and loving bond.