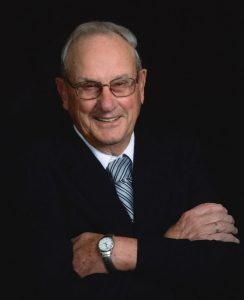 A Funeral Service will be held at 10:30 a.m. Friday, December 6, 2019 in the St. Matthew Lutheran Church of Mapleton, Iowa.  Rev. Christopher J. LaBoube will officiate. Committal Services will follow in the Mount Hope Cemetery of Mapleton, Iowa.

Military Rites will be conducted by the Loren Hollister Post No. 496 of the American Legion of Mapleton, Iowa.

A Visitation will be held from 4:00 p.m. to 6:00 p.m. on Thursday, December 5, 2019, with a Prayer Service at 6:00 p.m. at the Armstrong – Van Houten Funeral Home of Mapleton, Iowa. Condolences may be sent online to www.armstrongfuneral.com.

Marvin Henry Kruse was born on September 27, 1930, to Henry and Freda (Meyer) Kruse in Mapleton, Iowa. He spent his early years helping his dad farm. In 1953 he entered the U.S. Army, being stationed in Germany for two years.

On March 6, 1955, Marvin was united in marriage to Joyce Bierwirth in the Trinity Lutheran Church of Anthon, Iowa. The couple made their home in Anthon, where they were blessed with three children: Michael, Susan and Brenda.

Marvin worked for Groat Implement until 1956 when he started farming which was his dream. In 1973 Marvin and Joyce purchased his grandfather’s home place that his grandfather homesteaded in the 1800’s. They farmed there until retiring in 1996.

They then purchased a home in Mapleton. Marvin worked as a funeral attendant at the Armstrong Funeral Home for a number of years during his retirement.

Marvin was a member of St. Matthew Lutheran Church in Mapleton where he served as an elder and a member of the Loren Hollister Post No. 496 of the American Legion of Mapleton. He enjoyed farming, camping, playing cards and mowing many lawns around town.