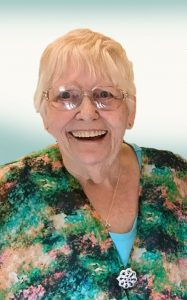 A Funeral Service was held at 10:30 a.m. on  Wednesday, December 11, 2019 at the Armstrong-Van Houten Funeral Home of Anthon, Iowa. Pastor Keith Byers officiated. Committal followed in the Oak Hill Cemetery of Anthon, Iowa.

Bonnie Jean (Mason) Putzier was born on March 29, 1943 at their family home in Plattsmouth, Nebraska. She was the daughter of Glen E. and Edna M. (Blunt) Mason. She grew up in Plattsmouth and received her education at Plattsmouth Comm. Schools.

While working in a restaurant as a waitress, Bonnie met the love of her life, Franklin “Frank” Putzier. The couple were united in marriage on October 17, 1959 and to this union five children were born: Theresa, Tammy, Franklin Jr., Tony and Christopher.

Due to Frank Sr.’s employment with Jensen Construction the family moved frequently. Bonnie held various positions in the restaurant industry as well as being a homemaker.

In her later years, Bonnie and Frank kept busy traveling with McDermott Family Midway. Bonnie ran a game booth while Frank worked as mechanic. The couple often joked that they got to have fun and get paid for it.

As the years went by, Bonnie and Frank welcomed their grandchildren. Many sweet memories were made as she cared for them and watched them grow.

Bonnie was an avid gardener and relished in the fruits of her labor through canning. She was an accomplished candy maker as well as great cook. Bonnie would start preparing many months before the holidays making candies, cookies, and delectable treats.  She also enjoyed crocheting, reading and treasured spending time with her family.

Bonnie was preceded in death by her parents, Glen and Edna Mason; her loving husband, Franklin H. Putzier, Sr.; a son, Tony Putzier; a granddaughter, Rachel Putzier; a sister, Peggy Brazil; and a son-in-law, Jerry Barcus.