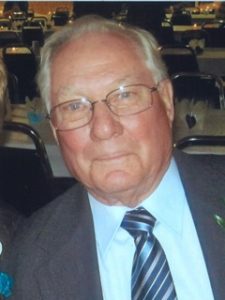 Don L. Schneckloth, age 86, of Cushing, was called to his heavenly home on Wednesday, December 4, 2019 at the Correctionville Specialty Care of Correctionville.

A funeral service was held on Saturday, December 7, 2019 at 10:30 AM at the First United Methodist Church of Cushing with the Pastor Kim A. Crummer officiating.

Burial will be at the Cushing Cemetery of Cushing with military rites conducted by the American Legion F. Roger Baumann Post #624 of Cushing.

Don was born October 19, 1933 in Holstein, Iowa.  He was the only son of John and Olga (Ruser) Schneckloth.  Don grew up in Holstein and graduated from Holstein High School in 1951.

Don was the homecoming king and participated in all sports.  As a young man growing up in town, he always jumped at any chance to help area farmers.  His lifelong dream was to be a farmer.

Don volunteered for the Army in 1953.  While in the Army he served in Germany, which gave him the opportunity to tour Europe.

One honor he was especially proud of was being blessed by the Pope.  Even though Don wasn’t Catholic, the Pope told him if you believe, we will all enter through the same gate.

He was honorably discharged from the Army in 1955.

He met his lifetime partner Gerane Beers in 1951.  They were united in marriage on September 25, 1955 at the Cushing Methodist Church.  Don was an active member of the church.  They made their home near Cushing and they were blessed with three children.

This is where Don began farming, fulfilling his lifelong dream.

Don’s greatest joy in life was his family.  He loved spending time with his children, grandchildren and great-grandchildren.  They were his greatest accomplishments in life.

Besides his family, Don’s other passions were John Deere, being an avid Iowa State fan, and being an active Legion member for 64 years. He enjoyed his daily trips to Cushing to socialize with all of his friends.  Don loved living near Cushing.

After retiring from farming, Don drove truck in the spring for Anfinson’s.  He would put on many miles in a day and some long hours but he loved every minute of it.

He was preceded in death by his parents, John and Olga; an infant brother; his parents-in-law, Alfred and Evelyn Beers; and a grandson, Ryan Schneckloth.