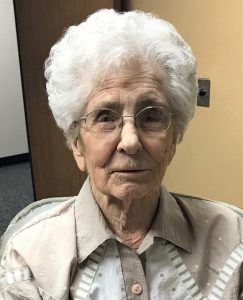 Mary A. Koetke, 91, of Kingsley, passed away, Wednesday, December 4, 2019 at Lawton Senior Living in Lawton, Iowa.

Funeral services were held at 11:00 a.m. on Monday, December 9, 2019 at First Lutheran Church in Kingsley, Iowa, with Pastor Jason Letsche officiating.  Burial was at Arlington Township Online condolences may be sent to rohdefh.com.

Mary grew up on a farm south of Peru attending Honey Creek country school until finishing the eighth grade after which she attended Peru High School graduating in 1945.  She began her college education at Peru State in Nebraska, and years later she acquired her degree at Westmar College in LeMars, Iowa.

On June 17, 1956 she and Merlin Koetke were married in the Coryell Chapel in rural Brock, Nebraska. That same year Mary was baptized and confirmed in the Lutheran faith.  Following their marriage Mary and Merlin made their home on a farm south of Kingsley until 1975 when they moved to the town of Kingsley.   Mary was a member of First Lutheran Church in Kingsley.

Mary’s husband, Merlin, passed away in October 1995. Following Merlin’s death, Mary continued to live in their house and remained very independent until the end.

Mary is survived by nieces and nephews.