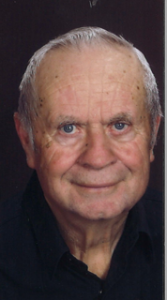 Richard Walter Cockburn was born on October 16, 1934 in Correctionville, Iowa, the son of James and Ethel (Casey) Cockburn.

Richard married Donna Florke on April 5, 1959 at the Little Brown Church.  To this union two sons were born, Steven and Dennis.

In 1961 Richard decided he wanted to farm, and it became his passion.  He and Donna moved to the farm and lived there for 50 years.

The land and livestock was the love of his life.  In 2010 he closed that chapter of his life and moved to town.

Up until the day of his death, he spoke about the years the crops were good or when he had frozen hog waters.

Richard loved car races and rodeos.  He was a lifelong member of the Church of Christ, attending from the time he was two weeks old.  He served on the board for 50+ years.  He also painted the old church building twice.

He was preceded in death by his parents; two brothers, George and Dean; his father-in-law, Willie Florke; and a sister-in-law.

In lieu of flowers the family requests memorials to the Correctionville Fire and Rescue.