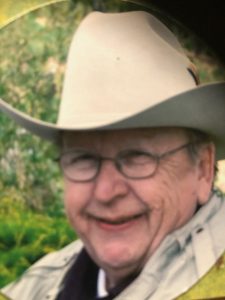 A funeral service was held Tuesday, December 17 at 10:30 A.M. at Community Presbyterian Church of Lawton.   Burial with military honors was held in Banner Cemetery in Lawton.

Online condolences may be made to www.meyerbroschapels.com.

He graduated from high school and was drafted into the United States Army, where he served as a medic in Korea during the Vietnam War.  He was honorably discharged after several years.

Terry was united in marriage to Joan Goodvin in 1967. She preceded him in death in 2017.

Terry started his career as a salesman, selling various medical and chemical supplies.  Later he became a landowner and was a part of the farming community.

He was an avid Chicago Cubs and Iowa Hawkeye fan and enjoyed teaching people to lose playing cards, chess, and cribbage; going to the casino; watching westerns on TV; and traveling throughout the U.S. and Europe.

He is preceded in death by his parents; his wife; a sister, Wanda Horsley; and brothers-in-law: Billy Goodvin and Bub Horsley.

Terry may be gone, but his laugh will never be forgotten.