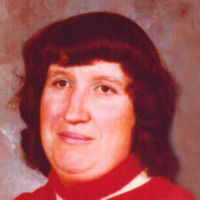 Services were at 11:00 a.m. on Saturday, December 21, 2019 at Waterbury Funeral Service of Sioux City with Rev. Michael Ring officiating.

Jo was a stay-at-home mom to her four children.

She was a collector of many things, but she was most known for her collection of Elvis Presley memorabilia and salt & pepper shakers. Jo had a love for all animals, especially her dog, Parker.

Jo had been living in the Correctionville nursing home for quite a few years and would often attend their Sunday church services.

The family would like to give special thanks to the staff at Correctionville Specialty Care and to Siouxland Pace.