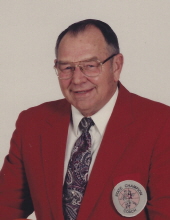 Services were at 11 a.m. Saturday, December 21 at Salem United Methodist Church. Burial was in Hubbard Cemetery.  Arrangements are under the direction of Boeke Funeral Home in Hubbard.

Lester Ben Hueser was born on July 10, 1930 in Marcus, Iowa. He was one of nine children born to Benjamin and Mildred (Pitts) Hueser. Les attended Tildren Country School and graduated at the age of 16 from Quimby High School in 1947. He lived most of his childhood in Quimby and had many fond memories of growing up there.

After graduating from high school, he went to the Iowa State Teachers College in Cedar Falls, Iowa and later graduated from Nebraska State Teaching College in Wayne, Nebraska. He met his wife Beverly while at Wayne.

After graduation he was drafted during the Korean War and spent two years in the military. Les was an Army Physical Training Instructor-bayonets at Fort Riley, Kansas from 1952-1954.

His teaching and coaching career began in Webb, Iowa in 1954. He coached boys and girls basketball, baseball, track and had all the P.E. classes in the school. In the summer of 1960, Les and his family moved to Hubbard, Iowa, where he was a math and P.E. teacher as well as softball and girls basketball coach. He eventually started the girls track program.

He also coached the elementary and junior high girls softball and basketball teams for numerous years.

Les coached seven teams to the state softball tournament, including state titles for Hubbard High School in 1964 & 1965. He was named the State Softball Coach of the Year in 1985 and 1993. In 1989, he was inducted into the Iowa High School Hall of Fame. In 1994, Les was named National Softball Coach of the Year. His overall softball record was 981-472, having coached for 35 years.

In 2010, he was inducted into the Hall of Fame of the National High School Athletic Coaches Association for Basketball.

He also umpired boys baseball and for 38 years officiated high school and junior college football games. He had many duties while being at Hubbard including Driver’s Ed Teacher, school bus driver, substitute teacher, any other jobs needed to be done at the school and groundskeeper of the softball diamond.

Les retired from teaching and coaching in 1995 taking on the role of Athletic Director for several years. In 2000, Les received the Iowa High School Administrator Award.

He was an avid reader and enjoyed golfing, always tried to get that hole in one, playing cards, traveling, family reunions, and spending time with his grandchildren and great-grandchildren, which were his pride and joy.

Les passed away on December 15, 2019 at the Hubbard Care Center where he had been a resident for seven years.