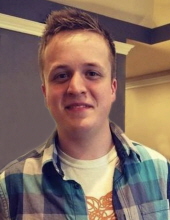 Evan G. Nettleton, age 26, of Sioux City, Iowa, passed away on Tuesday, December 24, 2019, as the result of an automobile accident.

The Armstrong – Van Houten Funeral Home is in charge of the funeral arrangements. Condolences may be sent online to www.armstrongfuneral.com.

Evan George Nettleton, eldest son of Thomas and Brenda (Schrunk) Nettleton, was welcomed into the world on July 3, 1993 in Sioux City, Iowa. He grew up in Sioux City until 2003 when the family relocated to Sloan, Iowa.

He departed this life into the arms of God who he worshiped and served with all of his heart on December 24, 2019.

In May of 2012, Evan graduated from Peacemakers Academy in Sioux City, Iowa. After graduation, Evan started working at Olive Garden in Sioux City.

While attending church at Cornerstone World Outreach, Evan would meet the love of his life, Sabrina Richie, and the two were united as one on April 25, 2015. The couple made their home in Sioux City and welcomed their three sons: Leland, James and Henry. Evan cherished every moment of being a father and spending time with his family.

After five years with Olive Garden, and after working a few other jobs, Evan would discover his passion for computers and coding and start his career with Catalyst IT Solutions in Sioux City.

He was currently employed with Catalyst and was expanding his knowledge of computer coding, working towards becoming an App Developer.

In his spare time, Evan was an amateur chef. He could be found watching America’s Test Kitchen, which nurtured an existing love of cooking.

He had an abiding love of music and music theory. He served at Cornerstone World Outreach in many capacities over the years, including Stage Manager and Head of the Sound Department. He loved being around people. With his confident, social and witty personality, Evan would light up a room. His father Thomas said, “He would always leave you with a smile on your face or laughing.”

Evan’s life touched so many others and he will live on in the hearts of those left to cherish his memory. He is survived by his wife, Sabrina Nettleton, and their three sons: Leland, James and Henry of Sioux City, IA; his parents, Thomas and Brenda Nettleton of Sloan, IA; brother Eric Nettleton of Sioux City, IA; his Cornerstone church family; and aunts, uncles, cousins, extended family and friends.

Evan was preceded in death by his grandparents, H. Allan and Cheryl Schrunk of Mapleton, IA, and Jack and Bernice Nettleton of Sioux Center, IA.

Cornerstone World Outreach has set up a fund for those who wish to donate their memorials online.  The Evan Nettleton Memorial Fund can be found at https://pushpay.com/g/evannettletonmemorial