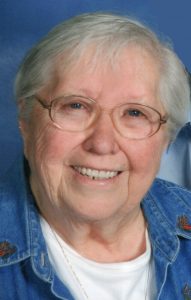 Services were at 10 a.m. Monday, January 6 at Trinity Lutheran Church in Moville, Iowa, with the Rev. Barb Spaulding officiating.  Burial was immediately following in the West Fork Township Cemetery in Climbing Hill.  Arrangements are under the direction of Waterbury Funeral Home of Sergeant Bluff.

Norma was born on September 27, 1930 in Sioux City, Iowa, the daughter of Fred and Emma (Ruhaak) Kamm.  She graduated from Moville High School in 1949.  She went to work at the A.S.C.S. office in Sioux City.

On June 5, 1960 Norma married Whitey Sulsberger at Trinity Lutheran Church in Moville.  They enjoyed 52 years of love and friendship until Whitey’s death in 2012.  She lived on the family farm in Climbing Hill for the last 59 years.

Norma was member of Trinity Lutheran Church in Moville, Iowa her entire life.

A friend recently described Norma as “a wellspring of love.”  That love poured out on her family and friends.  There was no such thing as a short conversation with her; she was just so interested in and concerned about everyone who came into her life.

Norma loved to garden, and up until the end, digging in the soil was a source of joy.

She was an avid reader who leaves behind a collection of enough books to fill two lifetimes.    She loved baking, and passed that love on to three generations.

She enjoyed numerous trips across many states with various family members over the years.

She will be lovingly remembered by her son Dennis of Kansas City; her daughter, Diane Riediger and husband Kendall of Lawton, Iowa; four grandchildren: Callista Cain of San Antonio, TX; Austin Riediger of Sibley, Iowa; Jessi (and Josh) Way of Cologne, MN; and Marty Riediger of Lawton; three great-grandchildren: Autumn, Summer and Aurora Adams; a sister-in-law, Colleen Kamm of Lawton; and numerous nieces, nephews and cousins.

In addition to her husband, she was preceded in death by her parents, her brother Frederick, and her sister, Elaine Garvey.