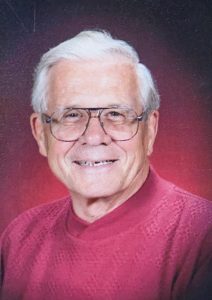 James Leonard Seuntjens, 83, went home to be with his Lord January 9, 2020 surrounded by his family.

A Funeral Mass will be held at Blessed Trinity Catholic Church on Thursday January 16 at 9 a.m., followed by a burial service at Good Shepard Memorial Gardens. Sign the online guestbook at www.robertsfunerals.com

James was one of six children born to John and Kathryn Seuntjens. He was raised in Kingsley, Iowa, where he was active in his church, school and helping on the farm.

After graduating from high school, he married his first wife Roberta Wormley, received a Bachelor’s degree in Accounting at Morningside College, and then moved to Nebraska to pursue his career and raise a family. He has four children: Debbie, Rodney, Rene and David from his first marriage of eleven years.

Forty-seven years ago, he married his beloved wife Carol and was blessed with another daughter, Kathie.

He maintained his career as an executive accountant and managed a 300-acre hobby farm with over 100 head of cattle in Minnesota.

He retired from Control Data Corporation at 50 and moved to Florida. In the next 33 years, he remodeled homes, built furniture and opened The Seasons and Camellia House Antiques. He was able to travel the world to vacation and spend time with his children and grandchildren.

James gave experiences rather than gifts and time instead of treasures. He believed his life was blessed with the help of God, his wife, children, family and friends.

James was proceeded in death by his parents, two sisters, and two brothers.