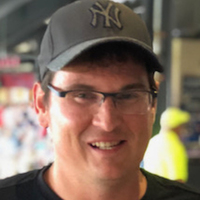 Jonathan Gehrig Johndreau, 38, of Lawton, Iowa, died January 10, 2020, after a courageous battle with Lupus at UNMC in Omaha.

Funeral services were held at 1:30 P.M. Wednesday, January 15, 2020 at the Community Presbyterian Church in Lawton.  Burial was at Banner Township Cemetery in Lawton.

Jon was born July 8, 1981 in Sioux City, the son of Gehrig and Julie (Hall) Johndreau.  Jon attended Lawton-Bronson K-12 and was in the first class to graduate from the new high school in Lawton in 2000.

His dad, G, was his best friend and he loved to spend time on the farm with him, learning about tractors, and developing his love for anything with a motor.  He began driving at the age of 2 when he crashed the family car through his grandparents’ barn.  His driving continued when he advanced to driving tractors at age 3.

He loved all things cars, trucks, tractors, and other farm implements.  He was a seat owner at Kansas Speedway for 20 years.

Jon helped at the Woodbury County Fair tough truck and figure 8 and despite his family’s desire for him to be on the sideline, he loved getting to drive his big blue truck in the event. Snowmobiling with friends was a favorite pastime and even in his years when he was no longer able to ride, he enjoyed hearing about his friends’ adventures.

Jon’s employment with O’Reilly Auto Parts for 18 years provided him the opportunity to meet and work with some of his best friends, as well as help customers who became friends.

He enjoyed the time during his career he spent traveling around the country opening up new stores, specifically in Alaska and Hawaii. Jon took pride in his work, no matter what it was he was doing.  He enjoyed working and was able to work until August 2019.

Jon had a zest for life, a great smile, loved talking with anyone, and was always willing to lend a hand.  He was a member of the Tri-State Antique Tractor Club and enjoyed the opportunity to visit with people and spend time with his dad.  He loved the tractor rides and seeing the antique collectibles.  He researched tractors and found tractors to add to the collection he shared with his dad.

Jon was a member of Lawton Community Presbyterian Church.

Jon battled Lupus since 2005, and not once did he feel sorry for himself or let this terrible disease steal his spirit.  His disease was managed the best it could be but eventually would take over his body destroying his kidneys, liver, blood, eyes and heart.

He was strong and courageous every day, not ever complaining, and always appreciative of those providing him with the care he needed.  His family is forever grateful for the doctors and nurses who provided exceptional care from the many teams at Mercy One and UNMC.

Jon is survived by his parents, Gehrig and Julie Johndreau; his big sister, Amy Denney; his, brother-in-law Ryan Denney; his nephews, Simon and Oliver Denney, and many wonderful aunts, uncles, and cousins.

He is proceeded in death by his grandparents, Alvin and Ruth Hall and Sonny and Florence Johndreau, and his uncle, Linn Hall.

In lieu of flowers, the family requests donations be made to the Lawton Volunteer Fire Association.