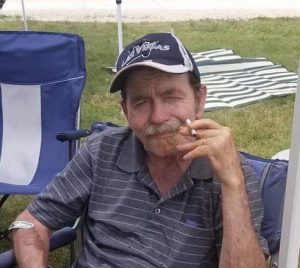 A celebration of life will be held at a later date. Lentz Funeral Home of Humboldt (www.lentzfuneralhome.com) is assisting the family.

In 1965, Curt was united in marriage to Sandy Dixon. Together they raised five children. Curt was employed at IBP and later Tyson Foods until retirement in 2010.

Curt was united in marriage to Sue Patterson (Grause) on June 23, 2001 at Little Sue Park, where they loved to camp and spend time with friends.

Curt loved to play baseball and he looked forward to the family reunion softball game.

Curt was given amazing care until the end by the staff at the hospital and the hospice team. Curt was a kind soul who loved life and everyone he ever met.

Rest in Peace, Curt. You will be missed by many.

Curt was preceded in death by his parents; his sister, Nancy Lane; his daughter, Jodi White; his sister-in-law Cindy Grause; his brother-in-law, Jeff Astor; and dear friends Keith Heinse, Bert and Lou Heinse.