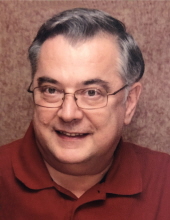 A Memorial Service was held at 11:00 a.m. Monday, January 13, 2020 in the St. Mary’s Catholic Church of Mapleton, Iowa. Msgr. Kenneth A. Seifreid officiated.

Steven James Stodola, the son of Stanley and Pauline (Dostal) Stodola, was born November 11, 1949 in Waterloo, Iowa. He grew up in Cedar Rapids and received his education from Regis High School in Cedar Rapids.

After high school, Steven continued his education at St. Mary’s University in Winona, Minnesota, where he obtained his teaching degree.

He began his teaching career at Cretin High School in St. Paul, Minnesota, teaching high school science classes. While teaching, Steven obtained his Master’s Degree from the University of St. Thomas. Steven then went on to teach for a few years at Breck High School in Minneapolis, Minnesota.

On July 19, 1975, Steven was united in marriage to Deborah Olsson in St. Paul, Minnesota. The couple was blessed with a son, Joel.

Due to a teacher shortage in Canada, the family decided to move to Manning in northern Alberta, Canada where Steven taught for a year. While in Canada the family welcomed their second child, son Ryan.

The family moved to Mapleton, Iowa, where Steven began his lifelong teaching career in the Maple Valley and Maple Valley/Anthon-Oto School Districts as a high school science and computer programming teacher for 37 years.

While living in Mapleton, the family was blessed with their third child, daughter Meegan.

Over the course of his teaching career, he influenced the lives of many students before retiring in 2008. He then went on to substitute teach for a number of years.

Steven enjoyed gardening, cooking, and was an avid genealogist. He had an artistic side to him which included creating greeting cards, digital scrapbooking, and creating pysanka, which are Ukrainian Easter eggs. Steven was a loving and devoted husband, father and grandfather.

Family was extremely important to him and his grandchildren brought him great joy. He will be dearly missed by those who knew and loved him.

He was preceded in death by his parents, Stanley and Pauline Stodola, and brothers Ron Stodola and Stan “Sandy” Stodola.