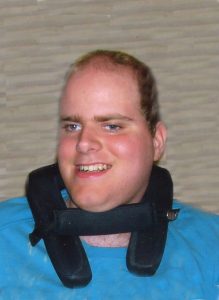 Funeral services were held at 2:00 p.m. Saturday January 25, 2020 at Christy Smith Morningside Chapel in Sioux City. Burial is at a later date.

Jake was born in Omaha, Nebraska on September 7, 1994, the son of Alan and Diane (Denning) Ralston. He lived in Moville for the first six years of his life.

He then moved to Faith Hope and Charity in Storm Lake until the age of 18 when he transferred to Village Northwest in Sheldon.

Jake was baptized in the Catholic Church.

His smile would light up the room and that would make everyone else around him smile and laugh.

He enjoyed listening to the Iowa Hawkeyes and Denver Broncos games.

He loved listening to all kinds of music in addition to his great sense of humor and fun-loving teasing nature.

He is survived by his parents, Alan and Diane of Moville; his brother Alex and his fiancée Azaria Hudson of Sioux City; and many aunts, uncles, and cousins, along with his many friends.

Jake was preceded in death by his grandparents, one aunt, and three uncles.

Memorials be made to Village Northwest Homes in Sheldon, Iowa in Jake’s name.