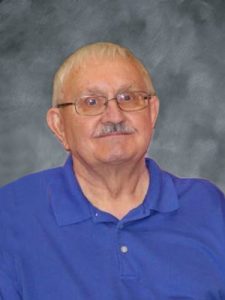 A Funeral Service will be held at 11:00 a.m. Friday, February 7, 2020 at the St. Paul Lutheran Church-Midway in rural Battle Creek, Iowa. Rev. Marty Davis will officiate.

A Visitation will be held from 5:00 p.m. to 7:00 p.m., with a Prayer Service held at 7:00 p.m., on Thursday, February 6, 2020 at the Armstrong – Van Houten Funeral Home of Mapleton. Committal will be at a later date in the St. Paul Lutheran Cemetery-Midway of rural Battle Creek, Iowa.

Armstrong – Van Houten Funeral Home of Mapleton, Iowa is in charge of the funeral arrangements. Condolences may be sent online to www.armstrongfuneral.com.

Byron M. Petersen was born on January 20, 1948 in Sioux City, Iowa. He was one of three children born to Marvin and Roberta (Lewis) Petersen.

Byron grew up on the family farm located near Midway.  He was baptized and confirmed in his Lutheran faith at St. Paul Lutheran Church-Midway of rural Battle Creek, Iowa. He was a 1966 graduate of Anthon-Oto High School.

Byron went on to continue his education for a year at Morningside College before returning home to engage in farming with his father Marvin. In 1968, Bryon enlisted in the Army National Guard. He was honorably discharged from service in 1974.

On August 22, 1970, in the St. Paul Lutheran Church-Midway, Byron married Marcia Lynn Groszkrueger. The couple settled down on the family farm by Midway and were blessed with two daughters, Britton and Hillary.

In 1985, the family relocated to the town of Mapleton, Iowa and Byron started the transition to a new career with Buzz Sexton at the Danbury Elevator.

When Danbury closed, Byron was hired on at Western Iowa Co-op just outside of Mapleton, Iowa until October 31, 2004, when Byron suffered a stroke which forced him into early retirement.

An avid sports enthusiast, Byron enjoyed rooting on his Oakland A’s and Hawkeyes and cheering on his grandchildren at their events. He also enjoyed baseball, slow pitch softball, and golf.

Byron was preceded in death by his parents, Marvin and Roberta Petersen; his parents-in-law, James and Wilma Groszkrueger; and a sister, Janice (Tom) Umbach.