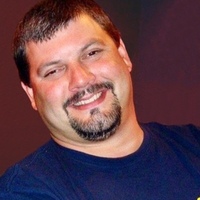 Nathan Lee Gevik, 46, of Sioux City, passed away Monday, January 27, 2020 at a local hospital from complications due to alcoholism. He was surrounded by family and friends.

Memorial service were held at 7:00 pm on Tuesday, February 4, 2020 at Waterbury Funeral Service of Sioux City.

Nate was the son of Gary and Jeanne (Blankenship) Gevik and was born on July 19, 1973 in Hawarden, Iowa. He attended Longfellow Elementary School, East Junior High School and East High School, where he made many lifelong friends.

Nate married Krista Blenderman on July 6, 1996 in Sioux City. To this union, three daughters were born: Natalie, Olivia and Abbey.

He was known to everyone for his quick smile and infectious laugh. He loved to host his annual birthday hog roast.

He played some fast-pitch softball, taking after his dad, wanting to be on the mound.

He also enjoyed slow-pitch softball, golfing, camping, and boating on the river with friends. He loved 80’s music, fantasy football and the San Francisco 49ers.

He had a man-crush on Justin Timberlake and was pretty sure they could be best friends.

For work over the years, he assembled office furniture, painted, and bartended.

He was loved immensely, but addiction doesn’t discriminate. For those of you also struggling, please don’t wait another day to seek help.

Nate was preceded in death by his father, Gary L. Gevik, and his sister, Amy L. Gevik. Memorials may be directed to the family.