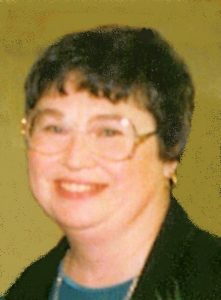 The service was held Feb. 3 at 10:30 a.m. at Immaculate Conception Catholic Church in Cherokee, Iowa. Burial was at Mount Calvary Cemetery in Cherokee.

Virginia Sue Grindle, the daughter of Rhea (Greenwood) and Virgil Grindle, was born July 5, 1955 in Hamburg, Iowa. She grew up in Glenwood, Iowa, where she attended the local schools.

Following graduation she attended Beauty School, and enjoyed working in a hair salon.

Virginia was set up on a blind date with Douglas Kohn, and the two were married on June 18, 1977.

They farmed in the Marcus and Cleghorn, Iowa areas, and were blessed with two daughters, Jennifer and Jody. They later made their home in Quimby, Iowa.

Once her girls were raised and out of the home, Virginia worked at K-Mart for several years. Some of her favorite pastimes were listening to audio books and having a good glass of wine.

She had a large collection of lighted Christmas village houses and snow globes.

Whenever she could, she kept up with her grandchildren’s activities; she was always interested in what they were doing. She loved playing games with them, especially “UNO”.

She was preceded in death by her parents and grandparents; her in-laws, Melvin and Margaret Kohn; and her sister-in-law, Marilyn Peck.

Left to cherish her memory is her husband, Douglas; her daughters, Jennifer (Kevin) Wood of Galva, IA, and their children Julie and Zachary, and Jody (Joseph) Magness of Dewey, OK, and their children, Joseph and Joshua; a sister-in-law, Randi Kelsay of Sioux Falls, SD; two brothers, Garland Kelsay of Sidney, IA, and Bill (Brenda) Kelsay of Glenwood, IA; in-laws, Ron (Joanne) Kohn of Glenwood and Larry (Linda) Kohn of Waterloo, NE; and numerous other relatives and friends.