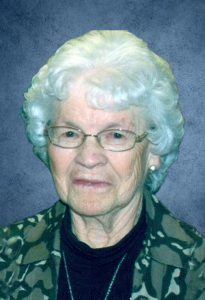 A Funeral Service was held at 10:30 a.m. Saturday, February 1, 2020, at the United Methodist Church of Cushing. Pastor Kim Crummer officiated with Committal Services following in the Cushing Cemetery of Cushing. The Christensen – Van Houten Funeral Home of Ida Grove, Iowa is in charge of the funeral arrangements.

Doris Elaine Heilman, the third of seven children, was born May 15, 1924 at the farm home southwest of Holstein, Iowa in Battle township.  Her parents were Harry and Eva (Baumann) Heilman.

She attended grade school at Battle No. 2 and graduated from Cushing High School in 1941. Then she attended Iowa State Teachers College, Cedar Falls, and taught rural schools for four years.

On March 16, l947, she married Everett Still. The couple farmed near Ida Grove until 1960. Their farm home was completely destroyed by fire in February l959.

In July of that year, they purchased a farm near Cushing where they lived and worked together. In l984 they retired from farming.

Doris and Everett were members of the Cushing Methodist Church where she taught Sunday School, held offices with the U.M.W., and served as church treasurer for 28 years.  She sat on the election board for 24 years and was always interested in politics. She was a 4-H leader and spent 35 years exhibiting in open classes at county fairs.

She loved games, puzzles, reading, embroidery, and golf. Most of all, she loved bowling. She bowled partners with her father, her husband, her sister Ruth, her daughter Shelley, and many others. She made many new friends through bowling.