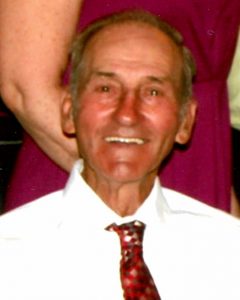 After his basic training he was stationed in Tokyo, where he worked in a medical hospital and was an assistant to the Chaplin until his honorable discharge.  Emmett was proud to be able to serve his country.

Emmett and Lucy Clarey were united in marriage on February 27, 1957.   Emmett and Lucy raised their 12 children living and working on the family farm.

Emmett was a member of St. Joseph Neptune Catholic Church rural Hinton, Iowa until it was closed in 2008; then he became a member of All Saints Parish in Le Mars, Iowa.  He was also a member of the American Legion Wasmer Post 241 of Le Mars, Iowa, Knights of Columbus and The Carpenter’s Union.

Emmett’s foundation was rooted in his faith in God. He was a good man, husband and father who never judged or spoke poorly of anyone.

He enjoyed visiting and being around his grandchildren and great-grandchildren, woodworking, gardening and spending time with his boys fishing and playing golf.  He could often be heard whistling or singing his favorite song while he went about his business.

In lieu of flowers, memorials may be directed to the Gehlen Catholic School, The Gospel Mission or Catholic Charities.