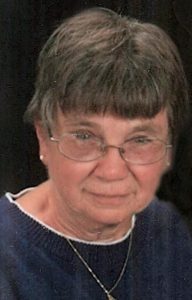 Junille Knaack, 79, of Correctionville, passed away Thursday, Feb. 6, 2020, at a Sioux City hospital.

Services were held at 10:30 a.m. Monday, February 10 at Grace United Methodist Church in Correctionville. The Rev. Kim Crummer officiated. Burial followed in Good Hope Cemetery in rural Correction-ville. Expressions of sympathy may be shared with the family at www.mauerjohnsonfh.com.

Elna Junille Knaack was born on February 3, 1941 in Kingsley, Iowa, the daughter of Ernest and Thelma (McConnell) Schweitzberger. She attended country school and later graduated from Pierson High School in 1959.

On June 4, 1959, Junille and Larry Duane Knaack were united in marriage at United Methodist Church in Pierson, Iowa. Larry’s work first took them to Onawa, Iowa. They also lived in Kansas and Nebraska. The opportunity arose for Junille and Larry to farm near Correctionville.

The couple made their home on the family farm near Correctionville, where together they farmed and raised their family.

Junille was a member of Grace United Methodist Church in Correctionville. She also belonged to the Good Hope Club. She enjoyed being outdoors where she cared for the livestock and tended to her vegetable and flower gardens.

She will be lovingly remembered by her daughter, Roberta Knaack of Correctionville; her son and his wife, Terry and Jackie Knaack of Greenfield, Indiana; a sister, Joyce Kohn of Cherokee, Iowa; and several nieces and nephews.

Junille was preceded in death by her parents, Ernest and Thelma; husband, Larry on March 16, 2011; father-in-law and mother-in-law, Chris and Sylvia Knaack; and a brother-in-law, Joseph Kohn.