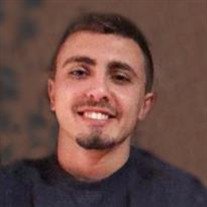 Johnny was born November 4, 1996 at Osceola, NE to John M. and Rebekah L. (Greene) Stephens. He grew up in Sioux City attending Sioux City Public Schools, graduating from East High in 2015. Starting at a young age Johnny was interested in wrestling. Johnny played football during his middle school years, but wrestling was his passion.
During his high school wrestling career at East High he qualified for the Iowa State High School Wrestling Tournament all four years. Johnny was a role model and a leader for the team and his cousins who wrestled as well.
Johnny went to work for Billion Automotive in 2017 and his strong work ethic helped him work his way up the ladder quickly. Most recently, he was employed as a service advisor at Billion Nissan in Sioux City.
On January 23, 2019 Johnny became a father when his daughter Lola was born. He was a dedicated loving father, who loved his little girl more than anything else in the world.

He was preceded in death by his aunt, Rebekah J. Stephens.