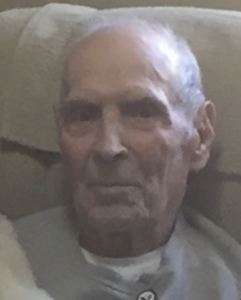 Rudolph Hofstatter, age 94, of Moville, passed away on Monday, February 10, 2020 at The Heritage at Northern Hills of Sioux City.

A funeral service will be held on Saturday, February 22, 2020 at 10:30 a.m. at the Nicklas D. Jensen Funeral Home of Moville with Russell Lawrey officiating.  Burial will be held at a later date.

A visitation will be held on Friday, February 21, 2020 from 5:00 – 7:00 p.m. at the Nicklas D. Jensen Funeral Home of Moville.  Online condolences can be made at nicklasdjensenfh.com

Rudolph “Rudy” Hofstatter was born on July 12, 1925 in Omaha, Nebraska to Alois and Apalonia (Fiala) Hofstatter.  He was a member of the United States Navy and he served during World War II for 29 months.

He was united in marriage to Ruth Vaughn on August 25, 1947.  To this union four children were born: Joyce, Susan, Jim and Mike.

During his working years, Rudy worked at Sawnson’s, Campbell’s as a supervisor and Ruth’s boss.  He purchased Motel 20 in Moville, which he ran from 1959-1976, retiring at the age of 47.

They enjoyed wintering in Florida for seven years after they retired.  He liked fishing, gardening, hunting and the occasional game of golf.

Rudy loved spending time with family and friends.  He will be remembered by those close to him as a jokester.