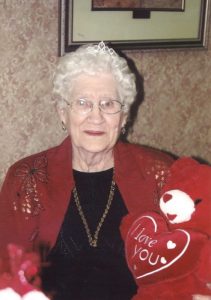 Ardyth  “Ardie” L. Heyer, age 86 of Cushing, passed away on Friday, February 14, 2020 at the Morningside Care Center of Ida Grove.

Ardyth LaRae Heyer was born November 24, 1933 to Orville and Irene (Goettsch) Watson.  She graduated from Correctionville High School in 1953.

Ardyth was united in marriage Darrell L. Bottjen on February 10, 1955.  To this union one daughter, Patricia Dee, was born.  Darrell passed away on January 9, 1958.

Ardyth was a lifelong resident of the Correctionville area, and enjoyed being a housewife and mother.  She loved caring for her tomato plants and houseplants and enjoyed doing embroidery.

Ardyth was preceded in death by her parents, Orville and Irene Watson; both husbands, Darrell Bottjen and Robert Heyer; a granddaughter, baby Hofstader; and a sister, Shirley Gray.