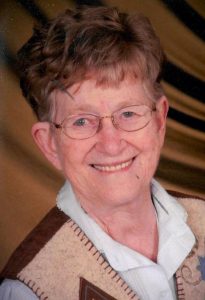 Funeral services were held at 10:30 a.m. on Monday, February 24, 2020 at Rohde Funeral Home in Kingsley, Iowa with Rev. LaVerne Petersen officiating.  Burial was at Kingsley Cemetery.  Online condolences may be sent to rohdefh.com.

Delores Illeen Wenzel was born July 6, 1932 in Moville, Iowa, the daughter Carl and Ruth (Guthridge) Petersen.  She grew up in the Moville area. Delores and Marlin Wenzel were married in 1949.

After their marriage, Delores worked on the farm sorting apples while Marlin worked for Eyres.  They both painted with Jay Lehner for 20 years, painting buildings as far away as South Dakota as well as locally.

She sold cream and eggs. She also raised 700 to 1,000 chickens a year to clean and sell for many years.  Many of the chickens went as far away as California and Canada.  She received two sheep after she and Marlin were married and raised them ever since.

Delores loved every animal that she came across, always caring for animals that were orphaned.  Some of the pets she tried to raise were a skunk, mink, squirrel, wood duck, rabbits, pheasants, geese, owls, many baby raccoons and a possum.  She was always a farmer at heart.

She enjoyed all sports, receiving the Remsen-Union School horse collar painted yellow for the fan of the year in 1968.  She embroidered tea towels for the Floyd Valley Hospital in LeMars for over 20 years being recognized for over 2,500 hours of embroidering.  She was a member of the Union Presbyterian Church, where she served on numerous boards as an elder, secretary of missions, finances, president of the Mary Martha Circle and responsible for sending out cards.

After the closing of the church, she became a member of the Kingsley United Methodist Church. Delores started Bingo Buddies 12 years ago for the community on Tuesday and Thursday which is held at Doosky’s here in Kingsley.

After Marlin passed away in 2003, Delores moved from the farm to Kingsley where she resided until just recently.  She especially enjoyed riding her motorcycle and being with her family.