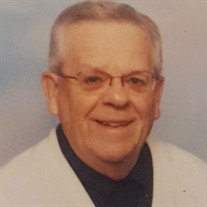 James Michael Bride, the son of William and Lela (Brownmiller) Bride, was born November 16, 1931 in Marcus, Iowa. He was in the first graduating class from Bishop Heelan Catholic High School in 1950.

While attending the University of Iowa, Jim was drafted into the U.S. Army and served until his honorable discharge.

He worked for the family business, Bride and Sons Construction, then later for Davis Finance Company. In 1965, Jim was employed with United Bank in Vermillion, South Dakota. Moving to Pomeroy, Iowa in 1973, he became the Vice President of the Pomeroy State Bank, with the eventual purchase of it until his retirement in 1995.

Jim was a very avid golfer and golf instructor. So many people appreciated Jim’s wisdom on how to improve their golf games.

He was preceded in death by his wife, parents, and three siblings: Joanne Jennings, Barbara Walters, and an infant sister named Karen Lee.