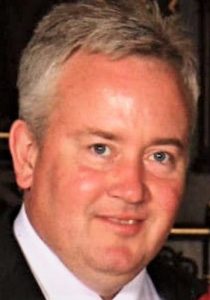 Kerry Lee DeWitt, 54, of Sioux City, passed away peacefully, surrounded by friends & family, on Friday, February 28, 2020 at his residence.

Services will be held at 11 a.m. Thursday, March 5 at Waterbury Funeral Service of Sioux City. Burial will follow services in Memorial Park Cemetery. Visitation is from 5 to 7 p.m. Wednesday, March 4 at the funeral home.

Kerry was born on Dec. 11, 1965 in Sioux City, the son of Homer and Orma (Kendall) DeWitt. He grew up in rural Sioux City and graduated from Lawton-Bronson High School.

On February 10, 1990, Kerry married the love of his life, Coral Harbeck, at the Morningside Assembly of God in Sioux City.

Kerry worked as a FedEx courier for 20 years. He enjoyed singing karaoke, convertible rides, and spending time with his friends and family, especially his grandchildren.

Kerry is survived by his wife of 30 years, Coral; two sons, Nathan DeWitt and Kolby (Jessica) DeWitt and their children Peter, Benjamin, Isabelle and William; his parents, Homer and Orma DeWitt; and a brother, Rocky (Vicki) DeWitt.

He was preceded in death by his father and mother-in-law, James and Alberta “Micki” Harbeck, and nephews Jeffrey and Justin DeWitt.