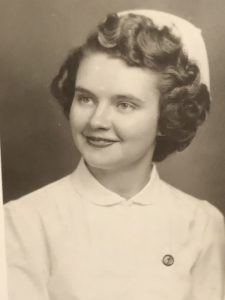 A funeral service will be held on April 25, 2020 at 11:00 a.m. at the Nicklas D. Jensen Funeral Home of Holstein with Merlyn Smith officiating.  Burial will be held at a later date.

Mary Grefe  Cooper, 87, joined her son Jamie in Heaven on February 26, 2020. She was born in Holstein, Iowa to William and Hulda Walker. She was the eldest sibling of herself, Dorothy and Kenneth.

Mary played basketball at Holstein High School and her team competed in the 1951 Iowa state championship. She was a majorette and played the trombone in the high school band.

Mary became a registered nurse at Methodist Hospital in Sioux City, Iowa in 1954. She dedicated her career to caring for those living with mental health conditions, serving in nursing and leadership roles at various hospitals, including the Cherokee State Hospital.

Mary and Don Grefe raised their family at Stratton Creek Farm near Washta, Iowa. In 1985, they sold their farm and moved to Texas. Along with nursing, Mary continued to be active in the church and her many community volunteer roles.

Mary loved the arts, particularly musical theater. She found great joy in singing. A talented artist, she was a member of the Hondo Art League for over 15 years.

In her later years, she enjoyed swimming and traveling throughout the United States and Mexico with Robert Cooper. Mary will be remembered for her calming presence, her wisdom, and ability to mend both physical and emotional wounds.

She was preceded in death by her parents, Robert Cooper and Donald Grefe; and her son, Jamie Dietrich Grefe.