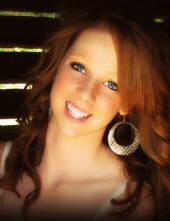 Memorial Service is Monday, March 2, 2020 at 10:30 a.m. at First Baptist Church in Tekamah, Nebraska.  Burial will be at a later date. Memorials to the family for future designation.

Morrgan Beatrice Elizabeth Reusch was born to Kelly Reusch and Tricia (Joy) Alexander on July 17, 1997 in Cherokee, Iowa. As a child, Morrgan always had a contagious smile. She brightened any room.

She was very close with her siblings and cousins; they were never far from one another and there was most likely mischief close by.

The imagination they shared always found them on a mission to explore that, no doubt, made all the adults nervous. One day you may have found her on a motorcycle and the next she could be seen with the whole group frog slapping, which is something that only those “river bottom” kids will ever understand. This was an activity that Morrgan’s dad took great enjoyment in doing with them.

Morrgan had a love of reading and books. Once she opened a book, she could not put it down until she completed it. This meant chores often got neglected, or a little sister bribe was needed, if it was a good read.

Morrgan had a relationship with her family that was like no other. From even the earliest age, she wanted to be their protector. The bond between Morrgan and her siblings was like no other. They had their battles, but when one was in need, the other two were there in a heartbeat.

As with any teenager, there may have been days she didn’t agree with her mom, or even like her much. However, as she became an adult, they became the best of friends. There was rarely a day that they didn’t talk many times.

Morrgan was a loving, compassionate person who enjoyed caring for others. She knew early in life that her calling was in the healthcare field. She worked as a Certified Nurse Assistant throughout high school and college.

After high school, she continued at Western Iowa Tech, where she graduated and became a Certified Surgical Technician.

Morrgan was most recently working in the surgery department at CNOS in Dakota Dunes. She was also continuing classes to finish her nursing degree. Morrgan loved the fact that her profession gave her new opportunities to help others daily.

Morrgan grew to find things that brought her pleasure and comfort. She had a love of crafting, jewelry making and glass etching. Those passions led her to create her own small business. She was so proud to announce the beginnings of Hen House Creations. She was blessed to be able to get paid to do something that she greatly loved.

In addition to her crafting, Morrgan developed a deep love of the outdoors. She spent many hours and days enjoying hiking, shed hunting or just plain enjoying the view a hilltop has to offer. In a recent conversation, she expressed that one of her very best memories is a birthday spent bow fishing with her love.

In 2016, Morrgan met the love of her life, Logan Persinger. The two of them created a life together in rural Turin. It was at this time, that Morrgan would find her true purpose in life.

The couple welcomed Walker James Persinger to the world June 10, 2019. From the instant she laid eyes on that sweet baby boy, she knew she had finally found her place. From that moment on, Walker was her entire world. She quickly went from a nervous new mother to a skilled baby whisperer. She took such pride in everything Walker did.

During the stressful time of new motherhood, she never forgot the importance of family. It became a new tradition that the entire family would begin every day with a text or snap of Morrgan and Walker beginning their day.  This grew to be something that they all looked forward to, and it will be something that will be missed beyond measure.