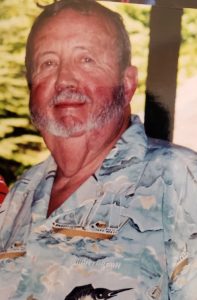 Ronald Handke passed away in his sleep on the morning of February 15 dreaming of a vacation full of visits with friends, sunny weather and baseball.

A memorial will be held on Saturday, March 14 at Gloria Dei Lutheran Church in Coos Bay, Oregon.  A reception will follow in the Fellowship Hall.

Ron was born on October 19, 1941 in Anthon, Iowa.  He graduated from Anthon-Oto High School in 1960. There he met his sweetheart, life partner and wife, Pamela Phillips. They married August 9, 1964. After graduating from Wayne State University, Ron was employed by the Lone Tree School District in the fall of 1964.

Looking for a new adventure the couple moved to Coquille, Oregon in 1966.  Soon afterward, they were blessed with their first child, Nicole.  From there Ron went on to become a wood and metal shop teacher at North Bend High School.

In 1974, Ron and Pam were blessed with their second daughter, Jonna. After pursuing a Master’s degree from Oregon State University, Ron became an administrator for the North Bend School District.

Ron “Hank” Handke had many hobbies from fishing and crabbing to woodworking and traveling.  He enjoyed living in the Pacific Northwest with its abundant natural resources.

Ron and Pam were active church goers and long-standing members of a close bible study group.  Hank also loved going to Beavers games. However, Ron’s biggest love was for his grandsons.  He enjoyed watching all the events that Alex, Seb, Cody and Carter were involved with.  In addition, he was thrilled to involve his grandsons in new experiences and share his wisdom with them.

In lieu of flowers, please consider donating to the North Bend Construction Trade Center for the Vocational education department at NBHS or to Gloria Dei Lutheran Church.  To leave condolences, visit www.macyandson.com.