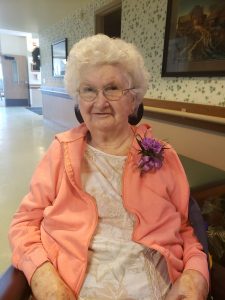 Funeral services will be held at 10:30 a.m. Thursday, March 5, 2020 at St. Michael Catholic Church in Kingsley, Iowa with Msgr. Duchaine officiating.  Burial will be at Sunset View Cemetery in Washta, Iowa.

Visitation is Wednesday, March 4 from 5:00 – 7:00 p.m. with family present during this time and a vigil service at 7:00 p.m. at the Rohde Funeral Home in Kingsley, Iowa.  Online condolences may be sent to rohdefh.com.

Sylvesta Mary Slota, was born on January 5, 1923 in Moville, Iowa. She was the daughter of Cecil and Amanda (Wink) Robinson. Her younger years were in the Moville area and then the family moved to the Grand Meadow and Washta area as they moved to different farms.

Sylvesta graduated from Grand Meadow Consolidated High School in 1940. Before the time of her death, she was believed to be the oldest living graduate of the school. While living west of Washta, she met and then married her neighbor, Walter Slota, a young farmer who had moved to the neighborhood.

Walter and Sylvesta married at 8 a.m. on Wednesday, June 6, 1945 at St. Michael Catholic Church in Kingsley, Iowa (Wonder who milked the cows that day?). For their wedding, the guests were served a two-course breakfast at the bride’s home. A reception and a three-course dinner (that’s at noon, by the way) was served at the bridegroom’s home to one hundred guests that was prepared and served by many of their friends and neighbors. In late afternoon, a three-tiered cake was served with ice cream, after which they attended a dance in Washta.

Sylvesta was a homemaker, living and raising her family on the farm west of Washta. She loved cooking, baking, gardening, and all flowers. She could cook a feast at a moment’s notice and did so for her family and friends many times.

Walter and Sylvesta retired in 1981 and moved to Washta shortly thereafter. They took dance lessons and then never stopped dancing, traveling to polka clubs, and attending their grandchildren’s sporting events.

Sylvesta loved her family dearly, almost even more her grandchildren. She enjoyed teaching them to make homemade noodles, play card games, and how to try to beat Grandpa at Rummikub. She also walked up and down the “big hill” west of Washta for exercise, probably more times than anybody ever has.

Because of her long and incredible life of 97 years, she was preceded in death by all her immediate family, which included her parents, her sister Verneda, and her brother Kermit, as well as her husband Walter and daughter Linda Sue.